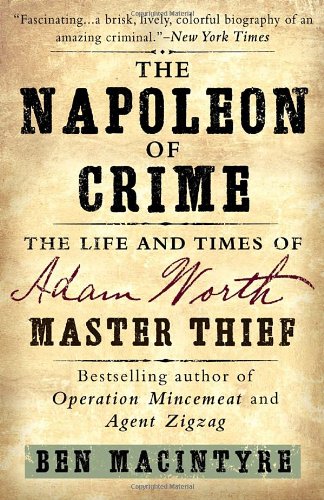 He is the Napoleon of crime, Watson.
He is the organizer of half that is evil and of nearly all that is undetected in this great city.
He is a genius, a philosopher, an abstract thinker. . . .
--Sherlock Holmes on Professor Moriarty in "The Final Problem"

The Victorian era's most infamous thief, Adam Worth was the original Napoleon of crime. Suave, cunning Worth learned early that the best way to succeed was to steal. And steal he did.

Following a strict code of honor, Worth won the respect of Victorian society. He also aroused its fear by becoming a chilling phantom, mingling undetected with the upper classes, whose valuables he brazenly stole. His most celebrated heist: Gainsborough's grand portrait of the Duchess of Devonshire--ancestor of Diana, Princess of Wales--a painting Worth adored and often slept with for twenty years.

With a brilliant gang that included "Piano" Charley, a jewel thief, train robber, and playboy, and "the Scratch" Becker, master forger, Worth secretly ran operations from New York to London, Paris, and South Africa--until betrayal and a Pinkerton man finally brought him down.

In a decadent age, Worth was an icon. His biography is a grand, dazzling tour into the gaslit underworld of the last century. . . and into the doomed genius of a criminal mastermind.

The Elopement
On a misty May midnight in the year 1876, three men emerged from a fashionable address in Piccadilly with top hats on their heads, money in their pockets, and burglary, on a grand scale, on their minds. At a deliberate pace the trio headed along the thoroughfare, and at the point where Piccadilly intersects with Old Bond Street, they came to a stop. Famed for its art galleries and antiques shops, the street by day was choked with the carriages of the wealthy, the well-bred, and the culturally well-informed. Now it was quite deserted.

The three men exchanged a few words at the corner of the street before one slipped into a doorway, invisible beyond the dancing gaslight shadows, while the other two turned right into Old Bond Street. They made an incongruous pair as they walked on: one was slight and dapper, some thirty-five years in age, with long, clipped mustaches, and dressed in the height of modern elegance, complete with pearl buttons and gold watch chain. The other, ambling a few paces behind, was a towering fellow with grizzled mutton-chop whiskers, whose ill-fitting frock coat barely contained a barrel chest. Had anyone been there to observe the couple, they might have assumed them to be a rich man taking the night air with his unprepossessing valet after a substantial dinner at his club.

Outside the art gallery of Thomas Agnew & Sons, at number 39, Old Bond Street, the two men paused, and while the aristocrat extinguished his cheroot and admired his own faint but stylish reflection in the glass, his brutish companion glanced furtively up and down the street. Then, at a word from his master, the giant flattened himself against the wall and joined his hands in a stirrup, into which the smaller man placed a well-shod foot, for all the world as if he were climbing onto a thoroughbred. With a grunt the big man heaved the little fellow up the wall and in a moment he had scrambled nimbly onto the window ledge some fifteen feet above the pavement. Balancing precariously, he whipped out a small crow bar, wrenched open the casement window, and slipped inside, as his companion vanished from sight beneath the gallery portal.

The room was unfurnished and unlit, but by the faint glow from the pavement gaslight a large painting in a gilt frame could be discerned on the opposite wall. The little man removed his hat as he drew closer.

The woman in the portrait, already famed throughout London as the most exquisite beauty ever to grace a canvas, gazed down with an imperious and inquisitive eye. Curls cascaded from beneath a broad-brimmed hat set at a rakish angle to frame a painted glance at once beckoning and mocking, and a smile just one quiver short of a full pout.

The faint rumble of a night watchman's snores wafted up from the room below, as the little gentleman unclipped a thick velvet rope that held the inquisitive public back from the painting during daylight hours. Extracting a sharp blade from his pocket, with infinite care he cut the portrait from its frame and laid it on the gallery floor. From his coat he took a small pot of paste, and using the tasseled end of the velvet rope, he daubed the back of the canvas to make it supple and then rolled it up with the paint facing outward to avoid cracking the surface, before slipping it inside his frock coat.

A few seconds later he had scrambled back down his monstrous assistant to the street below. A low whistle summoned the lookout from his street corner, and with jaunty step the little dandy set off back down Piccadilly, the stolen portrait pressed to his breast and his two rascally companions trailing behind.

The painted lady was Georgiana, Duchess of Devonshire, once celebrated as the fairest and wickedest woman in Georgian England. The painter was the great Thomas Gainsborough, who had executed this, one of his greatest portraits, around 1787. A few weeks before the events just recounted, the painting had been sold at auction for 10,000 guineas, at that time the highest price ever paid for a work of art, causing a sensation. Georgiana of Devonshire, nÚe Spencer, was once again the talk of London, much as her great-great-great-grandniece Diana, Princess of Wales, nÚe Spencer, would become in our age.

During Georgiana's lifetime, which ended in 1806, her admirers vied to pay tribute to "the amenity and graces of her deportment, her irresistible manners, and the seduction of her society." Her detractors, however, considered her a shameless harpy, a gambler, a drunk, and a threat to civilized morals who openly lived in a mÚnage-Ó-trois with her husband and his mistress. No woman of the time aroused more envy, or provoked more gossip.

The sale of Gainsborough's great painting to the art dealer William Agnew in 1876 had been the occasion for a fresh burst of Georgiana mania. Gainsborough's vision of enigmatic loveliness, and the extraordinary value now attached to it, became the talk of London. Victorian commentators, like their eighteenth-century predecessors, heaped praise once more on this icon of female beauty, while rehearsing some of the fruitier aspects of her sexual history.

When the painting was stolen, the public interest in Gainsborough's Duchess reached fever pitch. The painting acquired huge cultural and sexual symbolism. It was praised, reproduced, and parodied time and again, the Marilyn Monroe poster of its day, while Georgiana herself was again held up as the ultimate symbol of feminine coquetry.

The name of the man who kidnapped the Duchess that night in 1876 was Adam Worth, alias Henry J. Raymond, wealthy resident of Mayfair, sporting gentleman about town, and criminal mastermind. At the time of the theft Worth was at the peak of his powers, controlling a small army of lesser felons in an astonishing criminal industry. Stealing the picture was an act of larceny, but also one of hubris and romance. Georgiana and her portrait represented the pinnacle of English high society. Worth, by contrast, was a German-born Jew raised in abject poverty in America who, through an unbroken record of crime, had assembled the trappings of English privilege and status, and every appearance of virtue. The grand duchess had died seventy years before Worth decided, in his own words, to "elope" with her portrait, beginning a strange, true Victorian love affair between a crook and a canvas.

"Adam Worth, the greatest thief of the 19th century, could have furnished the basis of a great novel...Ben Macintyre has given him a biography that reads like one."

The ideal target for Macintyre's ("Forgotten Fatherland") mordant pen, Adam Worth (1844-1902) came to be called the Napoleon of crime not only because of his short stature but also, as the author points out, because anyone in that day who dominated a field was known as the Napoleon of it. At age 14, American-born Worth ran away from home, becoming a bounty jumper, then a New York City pickpocket, and finally graduated to organized crime of practically every variety. He carried out his deeds with utter impunity, despite the surveillance of Scotland Yard and Chicago's Pinkerton Detective Agency, and eventually became the model for Arthur Conan Doyle's Professor Moriarty, according to Macintyre. Most interesting here is the story behind the theft in 1876 of Gainsborough's portrait of the Duchess of Devonshire, which Worth held on to for 25 years. The Victorian tendency to blend lofty moral standards with excessive baseness is deliciously illustrated in the persons of Worth, his great adversary and friend William Pinkerton and a rogues' gallery of criminals, detectives and high-society folk. Some of Macintyre's observations are repetitive, but he has composed a portrait as spiced with wit as its subject is colorful. BOMC/QPB selection

The model for Sir Arthur Conan Doyle's Professor Moriarty, Adam Worth (1844-1902) was one of the greatest thieves of the Victorian era. Macintyre's ("Forgotten Fatherland: The Search for Elizabeth Nietzsche", LJ 10/1/92) entertaining biography traces how the American-born German Jew became the "godfather" of his era, building up a network that stole from banks and the wealthy. His biggest claim to fame was the theft of Thomas Gainsborough's portrait of the Duchess of Devonshire. For a quarter of a century, the obsessed Worth kept the painting. He had such an unusual relationship with the Pinkerton brothers that they acted as intermediaries when Worth returned the painting to its owner, thereby enhancing their detective agency's reputation. Macintyre has done his research well, and his book reads like an exciting detective novel. Providing a rare glimpse of the criminal and social atmosphere during the last part of the 19th century, it is highly recommended. Michael Sawyer, Clinton P.L., Iowa