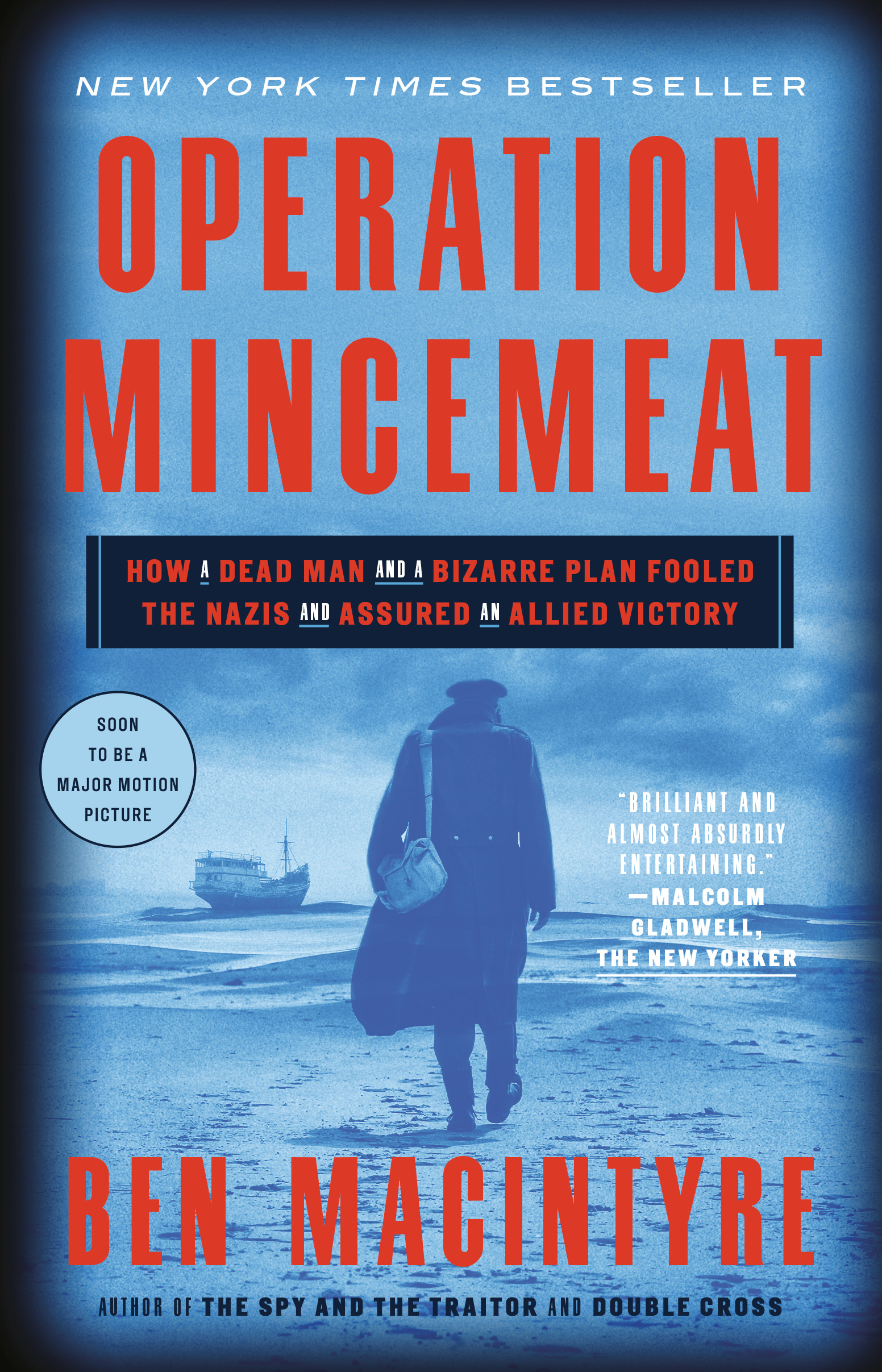 In 1943, from a windowless basement office in London, two brilliant intelligence officers conceived a plan that was both simple and complicated— Operation Mincemeat. The purpose? To deceive the Nazis into thinking that Allied forces were planning to attack southern Europe by way of Greece or Sardinia, rather than Sicily, as the Nazis had assumed, and the Allies ultimately chose.

Charles Cholmondeley of MI5 and the British naval intelligence officer Ewen Montagu could not have been more different. Cholmondeley was a dreamer seeking adventure. Montagu was an aristocratic, detail-oriented barrister. But together they were the perfect team and created an ingenious plan: Get a corpse, equip it with secret (but false and misleading) papers concerning the invasion, then drop it off the coast of Spain where German spies would, they hoped, take the bait. The idea was approved by British intelligence officials, including Ian Fleming (creator of James Bond). Winston Churchill believed it might ring true to the Axis and help bring victory to the Allies.

Filled with spies, double agents, rogues, fearless heroes, and one very important corpse, the story of Operation Mincemeat reads like an international thriller.

Unveiling never-before-released material, Ben Macintyre brings the reader right into the minds of intelligence officers, their moles and spies, and the German Abwehr agents who suffered the “twin frailties of wishfulness and yesmanship.” He weaves together the eccentric personalities of Cholmondeley and Montagu and their near-impossible feats into a riveting adventure that not only saved thousands of lives but paved the way for a pivotal battle in Sicily and, ultimately, Allied success in the war.

Chapter One
The Sardine Spotter

José Antonio Rey María had no intention of making history when he rowed out into the Atlantic from the coast of Andalusia in southwest Spain on April 30, 1943. He was merely looking for sardines.

José was proud of his reputation as the best fish spotter in Punta Umbria. On a clear day, he could pick out the telltale iridescent flash of sardines several fathoms deep. When he saw a shoal, José would mark the place with a buoy and then signal to Pepe Cordero and the other fishermen in the larger boat, La Calina, to row over swiftly with the horseshoe net.

But the weather today was bad for fish spotting. The sky was overcast, and an onshore wind ruffled the water's surface. The fishermen of Punta Umbria had set out before dawn, but so far they had caught only anchovies and a few bream. Rowing Ana, his little skiff, in a wide arc, José scanned the water again, the rising sun warming his back. On the shore, he could see the little cluster of fishing huts beneath the dunes on Playa del Portil, his home. Beyond that, past the estuary where the rivers Odiel and Tinto flowed into the sea, lay the port of Huelva.

The war, now in its fourth year, had hardly touched this part of Spain. Sometimes José would come across strange flotsam in the water- fragments of charred wood, pools of oil, and other debris that told of battles somewhere out at sea. Earlier that morning, he had heard gunfire in the distance, and a loud explosion. Pepe said that the war was ruining the fishing business, as no one had any money, and he might have to sell La Calina and Ana. It was rumoured that the captains of some of the larger fishing boats spied for the Germans or the British. But in most ways the hard lives of the fishermen continued as they had always done.

José had been born on the beach, in a hut made from driftwood, twenty- three years earlier. He had never traveled beyond Huelva. He had never been to school or learned to read and write. But no one in Punta Umbria was better at spotting fish.

It was midmorning when José noticed a "lump" above the surface of the water. At first he thought it must be a dead porpoise, but as he rowed closer the shape grew clearer, and then unmistakable. It was a body, floating, facedown, buoyed by a yellow life jacket, the lower part of the torso invisible. The figure seemed to be dressed in uniform.

As he reached over the gunwale to grab the body, José caught a gust of putrefaction and found himself looking into the face of a man, or, rather, what had been the face of a man. The chin was entirely covered in green mold, while the upper part of the face was dark, as if tanned by the sun. José wondered if the dead man had been burned in some accident at sea. The skin on the nose and chin had begun to rot away.

José waved and shouted to the other fishermen. As La Calina drew alongside, Pepe and the crew clustered to the gunwale. José called for them to throw down a rope and haul the body aboard, but "no-one wanted to touch it." Annoyed, José realized he would have to bring it ashore himself. Seizing a handful of sodden uniform, he hauled the corpse onto the stern, and with the legs still trailing in the water, he rowed back to shore, trying not to breathe in the smell.

On the part of the beach called La Bota-the boot-José and Pepe dragged the body up to the dunes. A black briefcase, attached to the man by a chain, trailed in the sand behind them. They laid out the corpse in the shade of a pine tree. Children streamed out of the huts and gathered around the gruesome spectacle. The man was tall, at least six feet, dressed in a khaki tunic and trench coat, with large army boots. Seventeen-year-old Obdulia Serrano spotted a small silver chain with a cross around his neck. The dead man must have been a Roman Catholic.

Obdulia was sent to summon the officer from the defense unit guarding this part of the coast. A dozen men of Spain's Seventy-second Infantry Regiment had been marching up and down the beach earlier that morning, as they did, rather pointlessly, most mornings, and the soldiers were now taking a siesta under the trees. The officer ordered two of his men to stand guard over the body, in case someone tried to go through the dead man's pockets, and trudged off up the beach to find his commanding officer.

The scent of the wild rosemary and jacaranda growing in the dunes could not mask the stench of decomposition. Flies buzzed around the body. The soldiers moved upwind. Somebody went to fetch a donkey to carry the body to the village of Punta Umbria four miles away. From there, it could be taken by boat across the estuary to Huelva. The children dispersed.

José Antonio Rey María, perfectly unaware of the events he had just set in motion, pushed his little boat back into the sea and resumed his search for sardines.

Two months earlier, in a tiny, tobacco-stained basement room beneath the Admiralty building in Whitehall, two men had sat puzzling over a conundrum of their own devising: how to create a person from nothing, a man who had never been. The younger man was tall and thin, with thick spectacles and an elaborate air-force mustache, which he twiddled in rapt concentration. The other, elegant and languid, was dressed in naval uniform and sucked on a curved pipe that fizzed and crackled evilly. The stuffy underground cavern lacked windows, natural light, and ventilation. The walls were covered in large maps and the ceiling stained a greasy nicotine yellow. It had once been a wine cellar. Now it was home to a section of the British Secret Service made up of four intelligence officers, seven secretaries and typists, six typewriters, a bank of locked filing cabinets, a dozen ashtrays, and two scrambler telephones. Section 17M was so secret that barely twenty people outside the room even knew of its existence.

Room 13 of the Admiralty was a clearinghouse of secrets, lies, and whispers. Every day the most lethal and valuable intelligence-decoded messages, deception plans, enemy troop movements, coded spy reports, and other mysteries-poured into this little basement room, where they were analyzed, assessed, and dispatched to distant parts of the world, the armor and ammunition of a secret war.

The two officers-Pipe and Mustache-were also responsible for running agents and double agents, espionage and counterespionage, intelligence, fakery, and fraud: they passed lies to the enemy that were false and damaging, as well as information that was true but harmless; they ran willing spies, reluctant spies pressed into service, and spies who did not exist at all. Now, with the war at its height, they set about creating a spy who was different from all the others and all that had come before: a secret agent who was not only fictional but dead.

The defining feature of this spy would be his falsity. He was a pure figment of imagination, a weapon in a war far removed from the traditional battle of bombs and bullets. At its most visible, war is fought with leadership, courage, tactics, and brute force; this is the conventional war of attack and counterattack, lines on a map, numbers and luck. This war is usually painted in black, white, and blood red, with winners, losers, and casualties: the good, the bad, and the dead. Alongside that conflict is another, less visible species of war, played out in shades of gray, a battle of deception, seduction, and bad faith, of tricks and mirrors, in which the truth is protected, as Churchill put it, by a "bodyguard of lies." The combatants in this war of the imagination were seldom what they seemed to be, for the covert world, in which fiction and reality are sometimes enemies and sometimes allies, attracts minds that are subtle, supple, and often extremely strange.

The man lying in the dunes at Punta Umbria was a fraud. The lies he carried would fly from London to Madrid to Berlin, traveling from a freezing Scottish loch to the shores of Sicily, from fiction to reality, and from Room 13 of the Admiralty all the way to Hitler's desk.

From the Hardcover edition.

"Here, finally, is the complete story with its full cast of characters (not a dull one among them), pure cathnip to fans of World War II thrillers and a lot of fun for everyone else."

"Brilliant and almost absurdly entertaining…The cast of characters involved in Mincemeat, as the caper was called, was extraordinary, and Macintyre tells their stories with gusto."

"OPERATION MINCEMEAT is utterly, to employ a dead word, thrilling. But to call it thus is to miss the point slightly in terms of admiring it properly….What makes OPERATION MINCEMEAT so winning, in addition to Mr. Macintyre’s meticulous research and the layers of his historical understanding, is his elegant, jaunty, and very British high style."

"Macintyre, whose previous book chronicled the incredible exploits of Eddie Chapman, the crook turned spy known as Zigzag, excels at this sort of twisted narrative….Great fun."

"A nearly flawless true-life picaresque…zeroes in on one of the few times in war history when excessive literary imagination, instead of hobbling a clandestine enterprise, worked beyond its authors’ wildest dream….Almost inedibly rich with literary truffles—doppelgangers, obsession, transgression, self-fashioning….It is hard to overstate how cinematic this story really was."