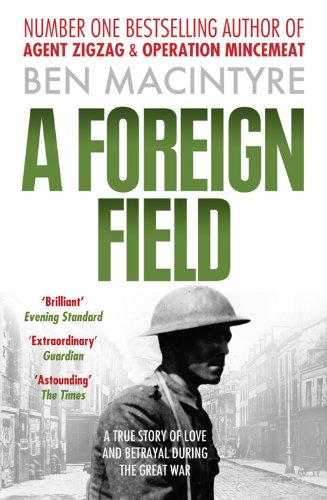 A wartime romance, survival saga and murder mystery set in rural France during the First World War, from the bestselling author of ‘Operation Mincemeat’ and ‘Agent Zig-Zag’.

Four young British soldiers find themselves trapped behind enemy lines at the height of the fighting on the Western Front in August 1914. Unable to get back to their units, they shelter in the tiny French village of Villeret, where they are fed, clothed and protected by the villagers, including the local matriarch Madame Dessenne, the baker and his wife.

The self-styled leader of the band of fugitives, Private Robert Digby, falls in love with the 20-year-old-daughter of one of his protectors, and in November 1915 she gives birth to a baby girl. The child is just six months old when someone betrays the men to the Germans. They are captured, tried as spies and summarily condemned to death.

Using the testimonies of the daughter, the villagers, detailed town hall records and, most movingly, the soldiers’ last letters, Ben Macintyre reconstructs an extraordinary story of love, duplicity and shame – ultimately seeking to discover through decades of village rumour the answer to the question, ‘Who betrayed Private Digby and his men?’ In this new updated edition the mystery is finally solved.

I loved “A Foreign Field”, the true story of an English soldier stranded behind enemy lines … at once a great romance, a war story, a social history and a whodunit

At the simplest level this is a love story. Stirring, ambitious and profound, this is storytelling at its very best

The true story of seven British soldiers trapped behind enemy lines, with brilliant research, [Macintyre has] built a powerful picture of what life was like for the Picardy villagers who protected them. I was fascinated